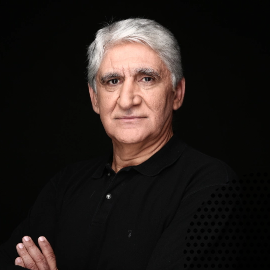 Panagiotis Giannakis was born and raised in Nikaia, Athens. He discovered his talent in basketball from a very young age and he became one of the biggest personalities in European Basketball. In parallel with his sporting career, he studied physical education in Athens’ University.

In 2005 Mr.Giannakis managed a unique achievement: Becoming the only person to have won the gold medal in EuroBasket with the National Team both as a player and as a head coach. He is also the only one that took part in a EuroLeague final as a player and as a coach. He made a great career at club and national team level, winning a lot of titles and also the respect of everyone.

Panagiotis Giannakis began his career in Ionikos Nikaias. He made his debut in the first team at 16 years old. In September 1976 he played for the first time in the Greek National Team. He was the first scorer of Greek League for the season 1979-80 and received a call for the Europe all-star team. Ιn 1982 he was drafted by the Boston Celtics. He was the first Greek without a US citizenship and the first that learned basketball in Greece that made it to the NBA draft. From 1984 to 1993 he made his own history in Aris, where he won 7 Championships, 6 Greek Cups and the Cup Winners' Cup. At the same time, he helped the Greek National Team to win the EuroBasket of 1987. He played for one year in Panionios and then he signed for Panathinaikos, to win the European Championship of 1996.

In 1997 he became head coach of the Greek National Team and reached the 4th position of Spain's EuroBasket. In 2011 he became the head coach of Panionios and the next year of Maroussi, where he stayed for 3.5 years. With Giannakis, Marousi made it to the second place of Greek League and to the final of FIBA Europe's League. In May 2004 he was hired again by the Greek National Team and led the “blues and whites” to the golden medal of Belgrade's EuroBasket and to the silver medal of the Basketball's World Cup in 2006. The team knocked out the USA in the semifinals. In 2008 he was hired by Olympiacos and he led the Piraeus team in Euroleague's Final Four after ten years. Next season, his team made it to the final of the Euroleague and won the Greek Cup. Afterwards, he worked in Limoges, in China National Team and he returned to Aris, this time as a head coach, in 2017.

In 2014, he founded Giannakis Academy, to offer a high-level training to kids and to impart the values he stands for to his trainees. He is an honorary professor of Thessaly's University and chairman of the Greek Head coach's Association. He’s been honored with the Golden Cross medal of apostle Pavlos and in 2021 he was introduced to FIBA's Hall of Fame.

Panagiotis Giannakis' vision to inspire the new generation and to motivate kids to a healthy lifestyle was combined with the vision of the co-President of Stavros Niarchos Foundation, Andreas Drakopoulos, to create Field of Life. The Coach is our CEO and he always stands by the kids.